China passes U.S. in Surgical Procedures in 2019 for first time in history. 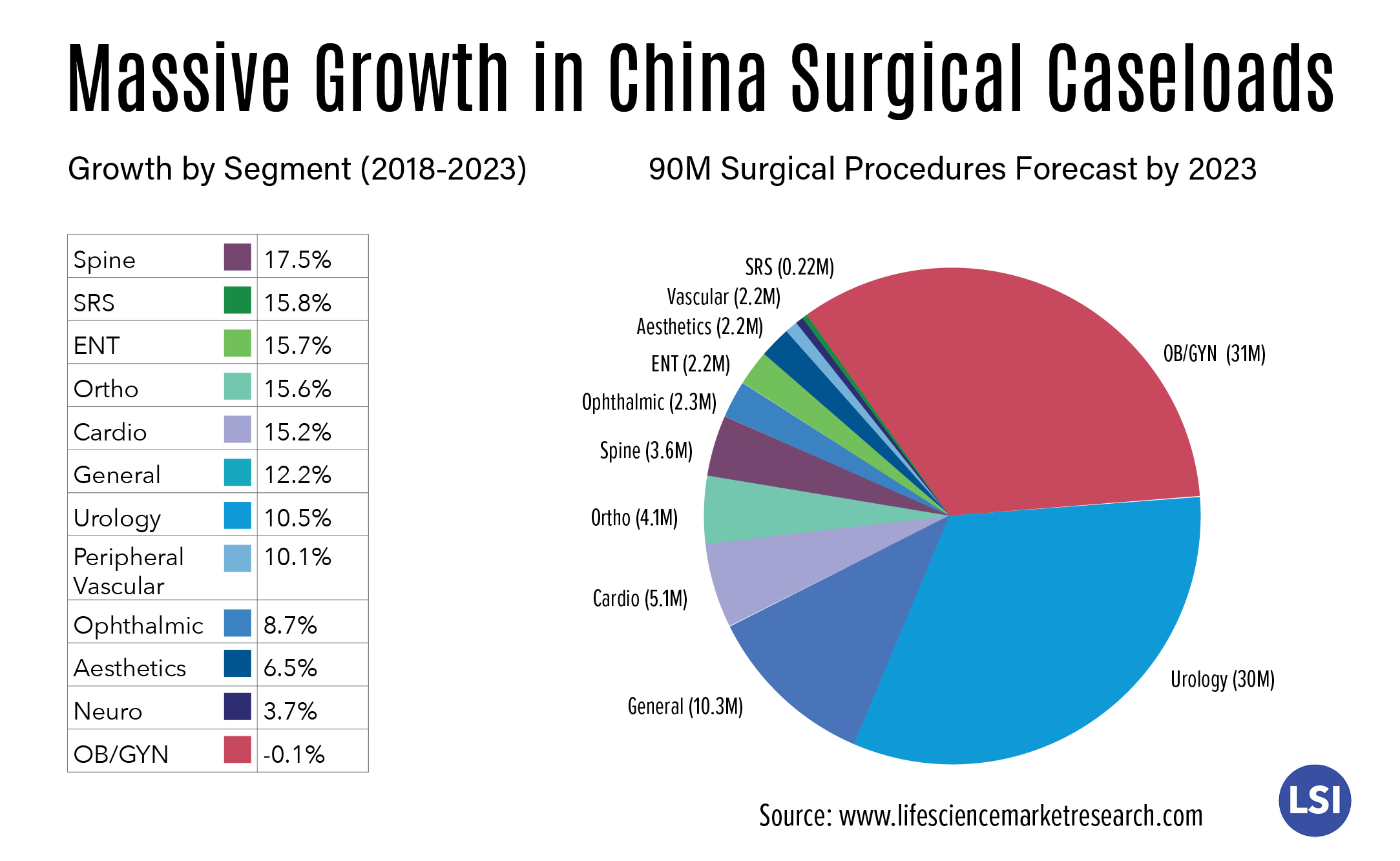 Healthcare in China is in a constant state of reform as the system evolves to meet the unique burdens of the country which rapidly became the world’s second largest economy. With a population of approximately 1.4 billion people, demand for healthcare services is at an all-time high in China, with many hospitals understaffed and overwhelmed by demand.

The elderly demographic continues to increase in China. Approximately 11% of the population is over the age of 65, which translates to approximately 154 million people. It is well noted that personal healthcare expenditure continues to rise with age as the risk of developing chronic conditions is heavily correlated with an individual’s age. As a result of this growing elderly demographic, surgical procedure volumes in China are projected to rapidly increase. Indeed, many types of surgical procedures are projected to increase at a CAGR between 10% and 15% from 2019 to 2022.

According to 2019 estimates from LSI’s Global Procedure Volume Tracker, the top three procedure categories, by total procedure volume, in China will be:

The rapid growth in surgical procedures in the near future is a reason why medtech companies have strived to penetrate the Chinese market. Despite this rapid growth, there are problems on the horizon for the Chinese healthcare system. There are still substantial issues with access and quality of healthcare in China. These issues are primarily attributed to urban vs. rural factors, income inequality, and an inability to meet the demand for healthcare. While great strides have been made to improve the affordability of healthcare in China, there is a tipping point in the future should the Chinese government be unable to find a solution to the shortage of healthcare specialists needed to provide care to such a large population.

Long-term, it is unlikely that the growth in surgical procedure volumes can be sustained. China is a graying nation, with an estimated birth rate of 1.62 births per woman as of 2016 – a rate considered to be below population replacement level. Researchers believe that by 2030, the population of China will begin an “unstoppable” decline which will have serious economic repercussions for the country. Further complicating the issue are the future economic concerns facing the country, with much of the population growing old before achieving middle-income status. This will make it difficult for many people to access healthcare that they will certainly require in the advanced years of their life.

The next installment in this series will look at surgical procedure volume trends in the five major European countries – France, Germany, Italy, Spain, and the United Kingdom.

Learn more about PV Tracker and the Medtech Pro platform at: www.lifesciencemarketresearch.com