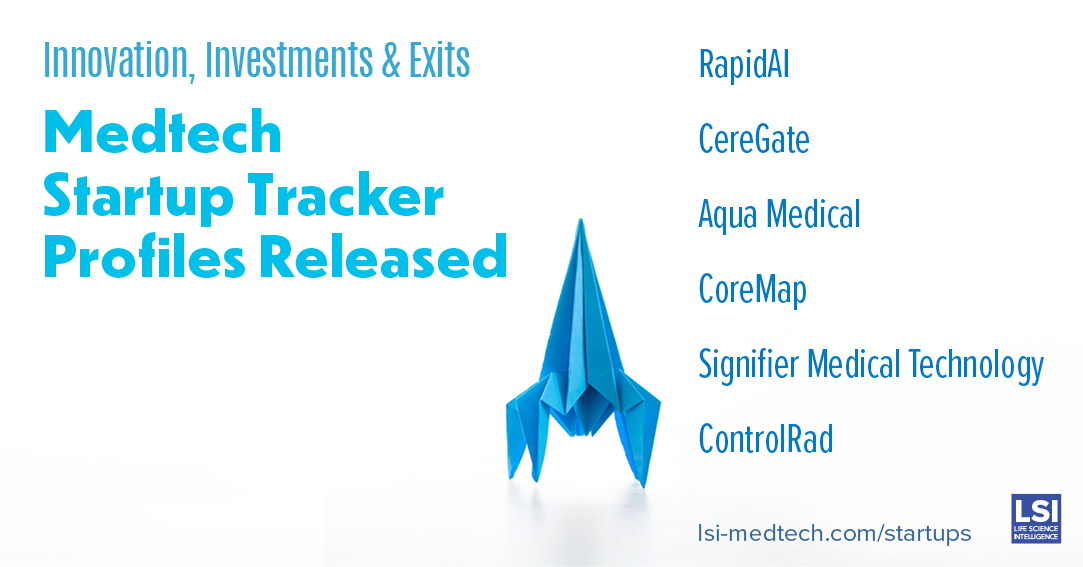 RapidAI announced that it has raised $25M in the Series B round. The funds will be used towards recognizing strategic growth initiatives around the world. The company develops software solutions to help healthcare providers diagnose and identify cerebrovascular disorders more effectively. Key strategics include GE Healthcare, Philips, and Siemens.

CereGate is developing a brain-machine interface

Startup CereGate recently raised an undisclosed amount of capital in a Series A round. The company plans to develop a brain-machine interface that increases the independence and quality of life of patients suffering from neurological disorders or sensory deficits. Other competitors developing brain-machine interfacing technology include Kernel, Neuralink, and Synchron.

Aqua Medical raises $8.2M in Series A round

Aqua Medical develops and commercializes the Radio Frequency Vapor Ablation (RFVA) system for the treatment of gastrointestinal diseases. With the completion of the recent Series A round, the company has raised approximately $15.5M. Key strategics in the endoscopic ablation market include Boston Scientific and Medtronic.

Improved electrophysiology mapping technology is in development at CoreMap

The company recently announced that it completed a Series A round in which it raised $10.5M. According to CoreMap, the funds will be used to facilitate product development and regulatory submission for its CoreMap VidereX catheter and Invenio workstation. Abbott, Biosense Webster (J&J), and Medtronic are some of the key competitors in the electrophysiology market.

Signifier Medical Technology is the developer of Snoozeal. The Snoozeal device uses electrical stimulation to tone the tongue, addressing the excessive relaxation of tongue muscle tone that causes snoring and mild sleep apnea. The company recently raised $10M in capital in a September Series C round. To-date the company has raised approximately $23M. Inspire, Philips, and ResMed are some of the key strategics in the anti-snoring and sleep apnea prevention market.

The company develops technology to help reduce harmful and unnecessary radiation to patients and healthcare personnel during fluoroscopic procedures. ControlRad Trace is indicated for use on mobile C-arms. In addition to its technology for mobile C-arms, ControlRad is developing technology for fixed C-arms, which is pending FDA approval. Competitors in the fluoroscopic imaging market include GE Healthcare, Shimadzu, and Siemens.