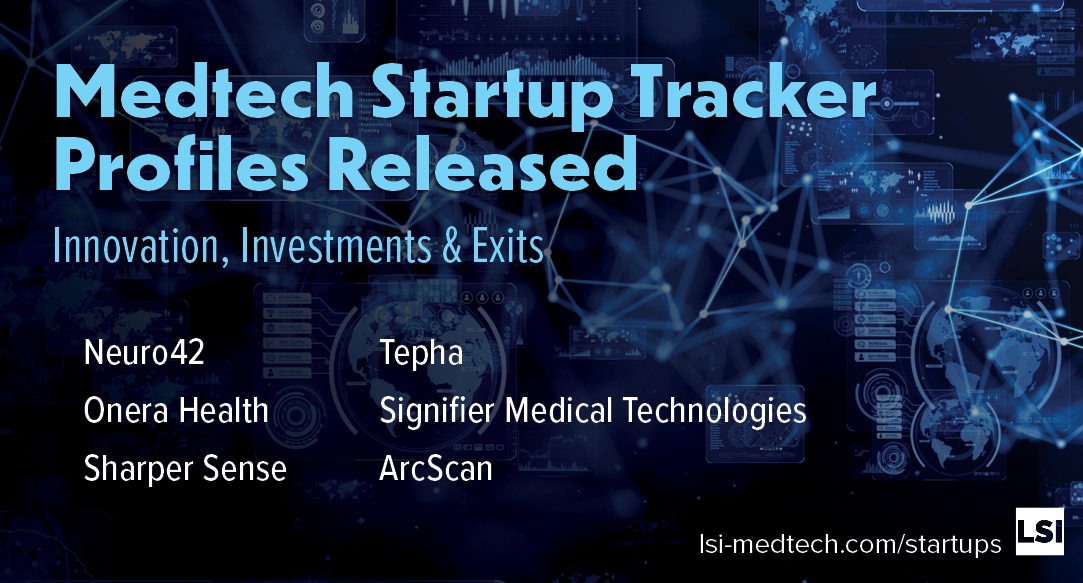 This week in medtech deals approximately $446M in funding was raised across 12 deals, in addition to several other undisclosed deals that were announced. This is a sizable increase in funds raised when compared to last week’s $111M. Here are some of the top deals tracked:

San Francisco-based startup Neuro42 is developing a portable MRI platform that leverages artificial intelligence and robotics. The point-of-care imaging system utilizes a low-field (magnet range of <0.3T) will support surgical procedures with automated treatment planning, predictive analysis, and live image guidance. In July 2021, the company announced that it had raised $6.5M from a Series A round. Portable, cost-effective MRI systems are one of the latest trends in making MR imaging more accessible. Other startups developing portable MRI systems include Hyperfine and Promaxo.

The company recently closed a Series B round in which $12.5M was raised, bringing total financing to approximately $24.4M. The recent investment will support commercialization of the company’s sleep diagnostics and monitoring solutions in the US and Europe. In addition, funds will be used to initiate clinical studies supporting the company’s solutions. Onera has developed a next-generation system for collecting vital information for the management and treatment of sleep-related disorders without the need for a professional sleep clinic. The technology also has benefits for hospitals that have limited access to sleep clinics by offering medical-grade monitoring from a discreet, wearable device.

Sharper Sense is developing a wearable to enhance sensory performance

The team at Sharper Sense is developing a completely non-invasive, wearable device that suppresses sensory noise by stimulating the vagus nerve in the neck. According to the company, reducing sensory noise improves the efficiency and rate at which the brain interprets sensory information. The device will offer benefits for patients suffering from sensory disorders and loss, as well as for individual desiring to improve their senses. The company recently completed its first round of funding, a Seed round valued in which $425,000 was raised.

BD announced that it has acquired Tepha, a developer of a proprietary resorbable polymer technology, for an undisclosed amount. Prior to the acquisition, the Massachusetts-based startup developed a commercialized a portfolio of surgical meshes, sutures, and films featuring TephaFLEX, a novel biomaterial belonging to a family of polyesters known as polyhydroxyalkanoates. Tepha had raised an estimated $35.2M in funding. The acquisition adds to BD’s surgical mesh portfolio, as well as expands the company’s offers in the soft tissue repair and reconstruction space.

Signifier Medical announced that it had closed the Series D round in late July 2021. Proceeds from the round will support commercialization of the companies FDA-approved eXcite device for the treatment of obstructive sleep apnea. The device treats mild obstructive sleep apnea and snoring via intraoral neuromuscular stimulation to improve tongue function. With this latest round of fundraising completed, the company has raised approximately $58M in capital to date. Other competitors developing solutions for the treatment of sleep apnea and snoring include Inspire, Philips, and ResMed.

The company’s flagship device is the ArcScan Insight 100, a benchtop anterior segment imaging system that utilizes high frequency ultrasound to capture high resolution images of the eye. ArcScan recently announced the completion of a Series B round in which the company raised $11.2M. This brings total funding for the company to 14.9M. The investment comes as a result of a Stock Purchase Agreement by Shanghai Haohai Biological Technology. With this investment and partnership, ArcScan will begin commercializing its imaging technology in China. Key strategics in the ophthalmic imaging market include Alcon, Carl Zeiss, and Nidek.