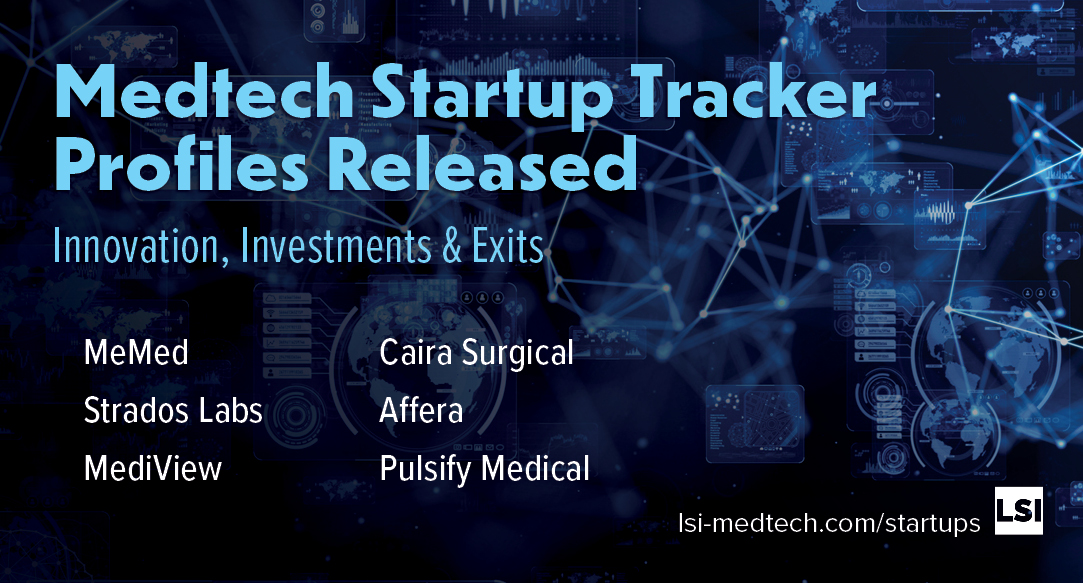 Last week, medtech startups raised approximately $358.4M in funding across 9 deals, in addition to other undisclosed deals that were announced. Following a lull in medtech startup fundraising during the holiday season, the first week of January saw an impressive surge in total funding. Approximately 80% of total funding tracked in the past week is attributed to the top three deals showcased in the table below.

The investment will be used to scale the company’s manufacturing capabilities, accelerate commercialization of its point-of-care (POC) diagnostic test, and expand portfolio of immune-based diagnostics. MeMed’s first product, which has received clearance from the FDA, is point-of-care blood test is intended to help healthcare providers rapidly determine if a patient has a bacterial or viral infection. The company has also received clearance in Europe for a test to predict severe outcomes in patients with COVID-19. MeMed’s diagnostic pipeline includes: a test to predict disease severity, a test to identify infected individuals in the asymptomatic stage, and an RNA immune response test. To date, the company has raised approximately $200M in capital.

According to the company, the investment will be used to scale its FDA cleared RESP system, in addition to funding additional clinical trials and expanding their proprietary database for acoustic biomarkers for respiratory disease. The RESP system enables continuous monitoring of respiratory health to detect, monitor, and identify respiratory events. Strados Labs CEO, Nick Delmonico, has shared that the RESP system will benefit pharmaceutical companies developing digital therapeutics that guide treatments and therapies for respiratory diseases. The company plans to obtain regulatory clearances for additional respiratory diseases to support patients with specific respiratory conditions. Following the completion of this recent funding round, the company has accrued an estimated $10.9M in total funding. Some of the key strategics in the respiratory monitoring market include Hill-Rom, Philips, and Omron.

The company’s augmented reality (AR) solutions are expanding the ways in which healthcare providers collaborate, navigate, and perform surgical procedures. The company’s first product to receive US FDA clearance is MediView XR30, allows providers to view ultrasound images in a more ergonomically optimized location. MediView is also developing MediView XR50 and XR90. XR50 is intended for needle-based procedures, helping guide practitioners to targeted anatomy via a holographic image. XR90 is being developed as a true digital surgery solution, overlaying detailed MRI or CT images and providing unique data to surgeons throughout surgical procedures.

The company is committed to improving outcomes and simplifying workflows during traditional and robotic joint replacement procedures. The company’s first product is a navigation system for use during knee replacement procedures. At the heart of the company’s solutions is a radar-based tracking technology that is intended to reduce reliance on more invasive, large footprint, and costly surgical equipment. In January 2022, the company completed a Seed round which raised $5M. Globus Medical, Stryker, and Zimmer-Biomet are leading strategics in the orthopedic solutions market.

Medtronic acquires Affera for approximately $1B

Boston-based Affera will be acquired by Medtronic, in an acquisition that will expand Medtronic’s portfolio of cardiac ablation solutions for the treatment of arrhythmia. The deal is expected to close in the first half of Medtronic’s fiscal year 2023. Affera has developed two technologies for the navigation and treatment of cardiac arrhythmias. Prism-1 is a cardiac mapping and navigation platform, as well as the Sphere-9 cardiac ablation catheter. The company is also developing HexaGEN, an ablation system capable of delivering pulsed field or radiofrequency energy to create lesions for the treatment of persistent atrial fibrillation. Medtronic is currently developing its own pulsed field ablation system, PulseSelect.

The Pulsify Patch is a flexible, wearable patch that utilizes ultrasound to continuously monitor a patient’s heart. Pulsify Medical’s technology will offer new insights into long-term cardiac function, capturing data throughout the day as the patient exercises, rests, and sleeps. Traditionally ultrasound has been restricted to being used within the physician office or hospital, limiting the data that can be collected with regards to cardiovascular performance. To date, the company has raised an estimated $7.2M in funding.

Life Science Intelligence is proud to announce Pulsify Medical & MediView will be presenting companies at the Emerging Medtech Summit in March 2022.