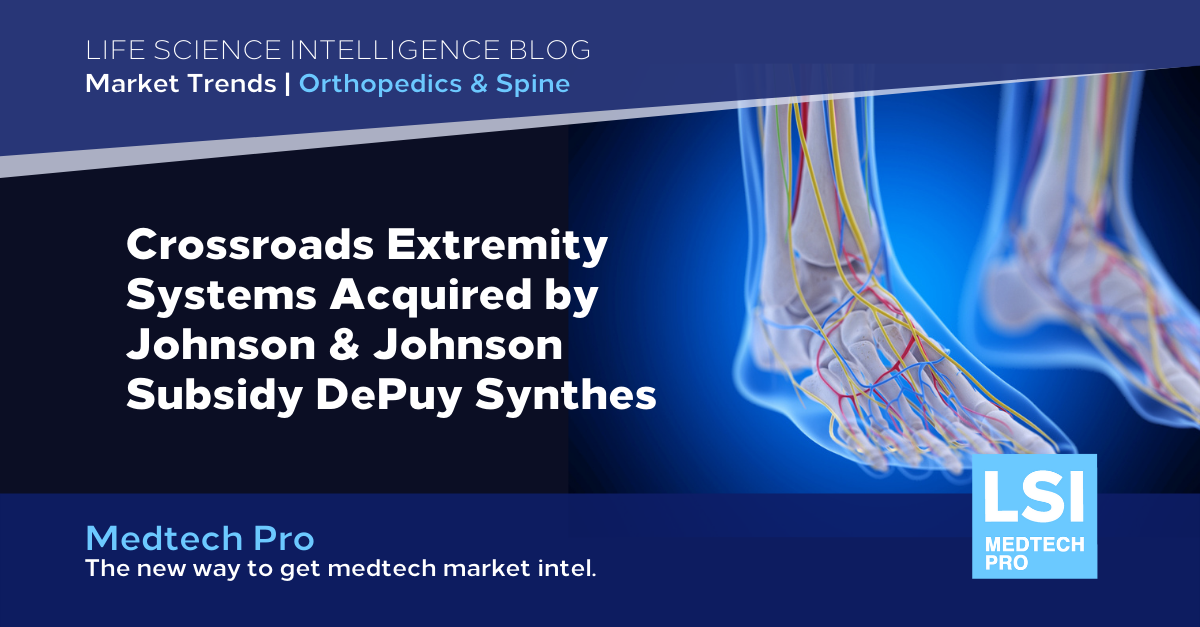 On February 11, 2022, CrossRoads Extremity Systems was acquired by DePuy Synthes, a subsidiary of Johnson & Johnson, for an undisclosed sum. According to LSI’s Medtech Pro Startup Tracker from Medtech Pro, the company had raised $19.7 million in funding from Runway Growth Capital and other investors.

CrossRoads Extremity Systems is an innovative company set to disrupt the orthopedic markets. Their flagship product, DynaForce Staple Compression Plates, utilizes staples rather than lag screws for bone compression. Traditionally, a lag screw has been used to compress bone fracture segments in orthopedic surgery. One drawback of this technique is that the screw penetrates the fusion site between the two bone fragments. The DynaForce staple technology shortens surgery time and enables the bone to heal faster than through the use of traditional lag screws. CrossRoads Extremity also has other innovative products for orthopedic surgery, specifically for foot and ankle procedures.

As a manufacturer of ankle and foot implant systems, CrossRoads Extremity Systems occupies an innovative position in the growing orthopedics market. Common orthopedic surgeries include fixing broken bones, knee replacements, hip replacement, shoulder replacement, joint fusion, ACL surgery, and arthroscopy. Due to the mechanical nature of the problem the patient is facing and the repairs used by the physicians, this is a market space that utilizes multiple medical devices that brings mechanics and medicine together into one single market. Orthopedics has been a lucrative field in wealthier locations like the US, Canada, Australia, and western European countries for decades, and it’s likely to be so in the future as well. However, the real growth can be seen in the developing world.

Generally speaking, people are living longer than ever before. However, the flip side of this is that an aging population will see more orthopedic problems. It’s possible to gain insight into market trends by consulting LSI’s Medtech Pro Procedure Volumes Tracker. As a result of the aging population, the number of orthopedic procedures is projected to increase significantly in several countries over the next five years. Specifically, for the period of 2019-2026, the US, UK, and Japan are projected to see a CAGR of 3.31%, 3.1%, and 2.96%, respectively. Since these are relatively large markets that already have an aging population, these are solid growth rates.

Looking at developing countries, the future is bright for the orthopedics market. Mexico is slated to see a CAGR of 3.4% from 2019 to 2026. When it comes to China and India, the projected growth rates are downright shocking, with an expected CAGR from 2019 to 2026 in China and India of 14.8% and 7.7%, respectively. Given that each country has a population of around 1.5 billion, these growth rates will lead to a stunning increase in the number of orthopedic procedures performed globally over the next five years. As these countries continue to age and catch up to the developed countries, growth is likely to be strong long term.

CrossRoads’ innovation and growing reputation in the orthopedic sub-segment of ankle and foot implants complements its new parent company’s global leadership in reconstructive implants. According to its latest 10-K filing, J&J DePuy Synthes did $8.6 billion in orthopedic sales in 2021. Additional figures from 2019 research by LSI and Health Research International (HRI) show that the company generated 2018 sales of $232 million globally and earned a 12.2% market share in the device sub-segment of reconstructive implants to the extremities (feet and ankles).

Acquisition by a subsidiary of Johnson & Johnson certainly draws attention to this innovative company, and it’s sure to draw additional attention to further investment rounds. LSI has identified several key players that may fill this role. In addition to Johnson & Johnson, these include Medtronic, Stryker, Zimmer-Biomet, Nuvasive, and Aesculap.

To learn more about this latest Johnson & Johnson DePuy Synthes acquisition and other deals that are impacting the medtech industry, subscribe to the Medtech Pro Startup Tracker.

Moving Healthcare to the Metaverse

The Rise and Fall of Telehealth - Where Will It Land?