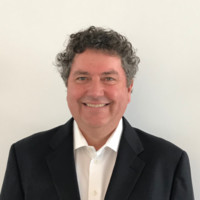 Jeff Amacker  0:00
Good afternoon, everyone. I'm Jeff Amacker, CEO of TibaRay. And I'm very excited to have the opportunity to talk to you about this breakthrough in radiation oncology equipment. It's a new technology, that's actually amazing.

The problem? Can you hear me over here? Okay. The problem that we that we have is cancer. Cancer is the number one killer globally, killing 10 million people a year 600,000 in the US. And in terms of trying to treat it, our ability to actually cure cancer is limited by the damage that we do to the patient. And this is true for all types of cancer treatments. Now, as we go and think about radiation oncology, which by the way, is used treating 60% of the patients, the treatments just too slow. And with a slow treatment, the tumor moves around. And so you end up having to treat a large volume of normal tissue to make sure that you get the treatment to get the tumor. It also turns out that if you deliver radiation, slowly, it does more damage to the normal tissue than if you deliver it very quickly. It's a biological effect that causes more damage to normal tissue. And the slow treatment is a bottleneck in the in the process, which limits access to care globally, and is costly. Our solution, curing cancer in a flash, we're going to treat 400 times faster than the current radiation oncology treatments. And when you do that, take an image treat, boom, it's done, there's not time for the tumor to move around, you can shrink the margins around the tumor and treat really just tumor instead of treating all the normal tissue from, you know, much better results, you also get to take advantage of the discoveries of the radio biological advantages. And with this machine, you'll be able to treat twice as many at least twice as many patients. So it's more efficient, doing a job of doing a better job of treating cancer patients. So how do we achieve this 400 times faster? Well, there are a couple parts to it. The first was a breakthrough in linear accelerator technology design that came out of the SLAC National Laboratory. And that lets us have 30 times more beam current coming out of an individual accelerator. And then we position the accelerators in a ring around the patient and focus the radiation from all of those accelerators onto the tumor and treating them all at once from the 16 accelerators. And so 30 times more beam current from 16 different directions all at once, get you the very high speed, there's no mechanical motion, mechanical motion is slow. So everything we do to intensity modulate the beam to in order to get exquisite dose distributions. That's all done electronically, not mechanically. And so it makes it really fast to be able to do these treatments. So let me give you an example. This is a 25 Gray lung cancer treatment, what you're looking at is Varian Trubeam machine doing gated rapid arc. That's the state of the art treatment. And this, what you see is there's a single linear accelerator that's in the bottom of this big gantry, and it's the beam comes up through right now through the bottom of the patient. As the gantry rotates around the patient in order to get the radiation to come in from all the different directions. This treatment will take over three minutes to deliver with the TibaRay, we're done. It's that much faster. Now looking at the biological response, here's a case of a skin cancer, nasty looking skin cancer that was treated. And what we see in the result from a very, very fast treatment is that there's no scarring, there's no visible damage to the normal tissue, the cancer is gone, but there's no damage to the normal tissue that's visible. Now it's pretty straightforward to do these very fast treatments with for skin cancer, but to do them for every single type of cancer anywhere in the body. That's something that TibaRay uniquely is going to be able to do. We have a great team. The TibaRay came out of Stanford. So the five founders were all out of Stanford, three of them from Stanford Medical. We have radiation oncologist, Dr. Loo, imaging expert in Rebecca. Peter brings the medical physics background. And then two people out of slack two scientists out of SLAC, Dr. Tantawi his lab is where the breakthrough in accelerator technology came from. So he's part of the founding team along with Vinod. I bring a background 28 years at Varian medical systems, and I've done product development, there lead the worldwide engineering team, as well as running business unit at Variance. So I have the background know, I've done these kinds of developments before and I had to go make this thing happen. Arun also has a commercial background, the engineering team reports to her at this point. We have a part time CFO, lots of great advisors, and a lot of interested and supportive advisors throughout the radiation oncology community.

In terms of IP, we have exclusive licenses for all the IP related to this. Some of it is very broad, for example, the idea of using two, two or more accelerators to treat a cancer patient at the same time, if that's patented, and we have the exclusive right to go ahead and do that. And then there's a lot of more detailed pieces of technology that are required in order to make this thing happen. And we've got patents on all of those and TibaRay has its own set of IP to support all of this. Looking at the competitive landscape at the time, we enter the market looking at it from the point of view of treatment speed, and cost effectiveness. Starting at the bottom of the chart is proton therapy, proton therapy machines are massive, you know, go take over a city block and you get proton therapy systems, the proton vendors will probably be able to do this, we would anticipate when we go to market with proton vendors will be there, they're doing some clinical trial work now trying to get themselves set up to go do this. The problem is that proton machine costs 10 times as much as what we're talking about for the cost of a machine. It's more than 10 times. And in mainstream radiotherapy, which are more affordable systems in which is on the top part more cost effective. The technology is just not there, the vendors aren't going to be able to get there. So being able to do it with a very high speed and in a cost effective way. It's TibaRay, uniquely us, we're the only ones who are going to be able to do this. The business model, radiation oncology equipment is a good business, you can get high return on sales, high sales per employee, if you assume that we can get to 5% share of new machines, which is arguable how aggressive that is, it's not too aggressive, I don't think you can get to really high valuations at that point with that kind of growth and penetration into this market. The target market it $8 billion tam at the time we enter it, it's growing at 6% per year. Unfortunately, it's probably going to continue to grow at that kind of a rate for a long time. I say unfortunately, because we're talking about cancer patients. And as a reminder, we're talking about a machine that sits right smack in the middle of cancer therapy for all different kinds of cancer, and currently treat 60% of the patients. This is a four year product development effort. We have a two phased regulatory approach. First, we'll be able to do a 510 K doesn't require clinical trials for us to go to market with the machine, we can get it placed into thought leaders do whatever clinical work we want to do in order to make additional claims. I don't know exactly what those look like yet depends on what the proton vendors managed to demonstrate with what they're doing, we get to piggyback on their clinical work, which would be helpful. In terms of reimbursement, this machine works very well with the current reimbursement codes. So even if we don't get a new code, it's an attractive machine for clinics to buy in order and get benefits in terms of doing this but it's also more efficient machine. At this point, we are looking for series A partners, big funding partners to help us with a $25 million series A and and then we decided to go ahead and open a $3 million convertible note so that we can start some of the long lead work while we negotiate a Series A we opened that three weeks ago. It's almost halfway subscribed now. So if you're interested in that, come talk to us soon. Why TibaRay, this is really we're going to make a big difference in cancer care. We're going to treat cancer patients in a fraction of a second and it's going to stop the march motion problem. It's going to do a better job in terms of radiobiology we should get to the point of better outcomes from all those things. It's a more efficient machine so we can treat more patients with it. We got the right team to go make it happen. And we're going to impact millions of cancer patients. And I hope that you will decide to come join us on our journey. Thank you

Jeff is a successful general manager who retired from Varian Medical Systems after 28 years to start his own financial planning business. After successfully growing the business for four years, he sold it so he could lead a Radiation Oncology startup: TibaRay, Inc. His 17 years of engineering experience and 17 years of successful business management have given him a unique understanding of both the technology and the business of Radiation Oncology capital equipment.