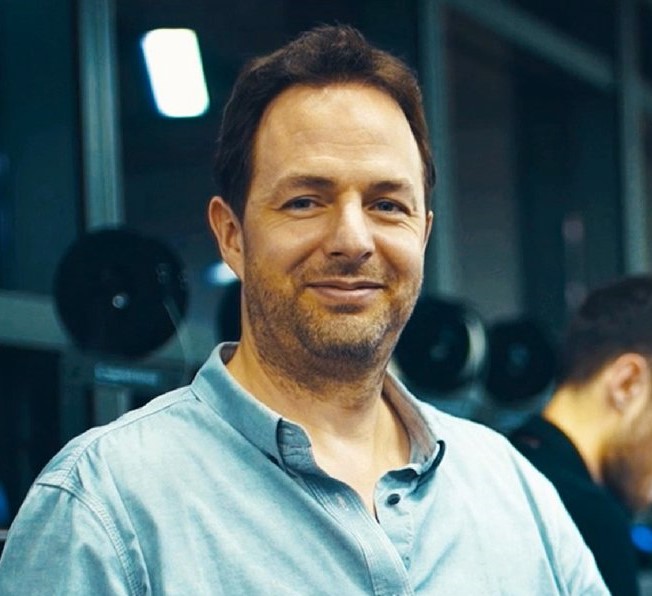 Good morning, everyone. Thank you, for those of you that have made it upstairs from downstairs. My name is Richard Hanbury CEO of Sana Health, I first went into the pain space because I had a road traffic accident in the Yemen, I had to drive off a bridge that resulted in a nerve damage pain problem that gave me a five year life expectancy. So all of this is a result of that. And I've been a 30 year mission now to get what work to solve my pain to to help solve other people's. So this is this is the version in real life. And you can see on the screen someone puts on the device turns on, they're getting pulses of light through closed eyes and pulses of sound to neuro modulate to create anxiety relief on demand. So if you think about all the ways you can neuromodulate, you can go through TMS or you can go through tDCS. But both of those have to go through the skull or up the vagus nerve. But we're using the brain's own information system to actually get a signal into the brain in a more efficient manner. This is some of the pilot results there. Were connected that we're collecting data from the forehead for heart rate variability, so we can measure what we're doing, which we're building into a feedback loop. Chronic pain is our starting point. Obviously with me it was nerve damage pain problem that it fixed. We are also able to go off to any area of pain or mental health where anxiety is a component. Fibromyalgia is our go to market, there are only three approved drugs and one of which is commonly used which is Lyrica and I will go on to how we compare. But obviously very large market. We are a class two device, we are on market as a wellness device. And we are going through pivotals for the class two, we are solving hemispheric imbalance, which is basically a very large difference in overall output and frequency distribution between the left and right hemisphere. That results from chronic pain or chronic anxiety. We have some early data that proves that but that is correct. Versus Lyrica, the main drug that we compete with, on fibromyalgia, we help four times as many people on average for four times as long. So the only drug that is sold for with any amount that is approved fibromyalgia, only about 20% of people tolerate it in the first place, and 80% of them are not using it by the six month mark. And we've now got people who've been using a device for two years, we both essentially have no one stopped using a device if they've used it for a month we are creating a closed loop feedback system in the next gen of the device. So in real time, the device will be asking which of the solver algorithms is working for people. And then prioritizing those sub algorithms. We've got a strong patent portfolio, this continues to grow, but basically means that anything audio visual, and stimulation is covered by our first issued patent. And then creating that feedback loop is covered by patent number two, talked a bit about already about how we stack up against the competition that basically we're able to go after central sensitization to pain, which is why we can go after all of these different areas. Really good pilot results, especially when focused on the worst of the worst. And this was in a first 76 out of 1000 person one arm study. Rather than try to explain this, I will let a user explain it. But no audio barely

able to build our darker point. I mean, getting getting into a doctor awkward point was like sticking knives in my back was horrible. Nowadays, it's more like you know, less less knives and less pain. I can move more I gotten off enough meds to where I can drive myself. My anxiety has dropped almost 90% I'd say I used to be prescribed Xanax monthly. And I think I've had my last two containers of Xanax for the last six months. I don't think I've replaced him in a while and that's huge. It's like flossing. Your brain getting those nerves all clean. That's the best way I could describe

it. So prior to using sauna My pain level was nine every day. It never went below that. It went above it. I was in bed most of the time and when I went anywhere I had to go in a wheelchair after Sana the first time I used it immediately I went from a nine to a six and my energy level came back full immediately. I went from using my wheelchair two thirds of the time before using the device and now I don't use it at all unless there's a lot of walking the biggest change I noticed from since using SANA is my body wasn't so raw because it wasn't in pain all the time. My 13 year old daughter said, you know, it's kind of neat, Mom, I can hug you again. I homeschool my daughter. So after using sauna I've actually been able to work with her more on one on one on one and answer her questions. And whereas before SANA I'd usually have a Do Not Disturb sign up because I was in so much pain I couldn't focus. You can't be can't pay for something amazing. Yeah, it definitely changed my life.

So yeah, so that's, that's, that's a real, that's a real world benefit. There are 10 million people in the country diagnosed with fibromyalgia. And Lyrica currently is the only real option. FDA clearance we're about to submit. We also have the 1000 person, one arm study going on in parallel, which is to prove out two year efficacy rates. We've also got a neuropathic pivotal going on at Mount Sinai, that should be due by the end of the year. And then the next anxiety is anxiety, Pivotal. I'm going to fast forward through a couple of these. We're dealing with some very big markets here five and larger, first PTSD, neuropathic pain, and then overall chronic pain. Our clinical timeline again, so Fibromyalgia first neuropathic pain, second, anxiety. Third, we've just got a DoD grant for PTSD. And a second grant for sleep and pain. And adolescent depression will be the next one, we start after that. So yeah, FDA breakthrough designation, was one of the things we haven't covered. And then just on the finance side, we're raising a bridge round for 10 million of which we've already closed on 5.5 million from existing investors, it's a safe note, with a 90 million cap on a 15% discount. And that is to get us through to a series B this time next year, with the aim of having three FDA indications at that point, and have nailed down our reimbursement pathway and have proof that people will pay out of pocket while we're waiting for reimbursement. Really great team that I'm really, really grateful to be working with. We're a team of 24 at the moment. We are primarily based in Colorado. And with that 24 people, we have now five large studies going on. So we're a small team with very big ambitions. Really talked a bit about the round already, and the milestones, but really just want to say so. With me, the device fixed my underlying pain problem completely. In three months. Most people in most conditions were a tool in their toolkit. With Fibromyalgia, we're getting somewhere around 50% improvements in quality of life, which is massive. If we combine with the other therapies that are emerging, we can really help solve a large number of these problems. We're also expecting to collaborate very well with some of the major devices like spinal cord stimulators that are doing peripheral pain reduction, because we're doing central AND to combine together. And we're also looking for drug device combinations where we can help as well as a tool and toolkit. So I'm around spot me, I'd love to do demos on people. We have a device, any arm chair, anybody can take a nap for 10-15 minutes, so please catch me through the rest of the conference. Thank you very much

With an MBA in Healthcare and Entrepreneurial Studies from Wharton Business School, Hanbury went on to become the founder of Sana, a device that allows anyone to have deep relaxation and pain relief anywhere in an average of 8-10 mintues. Sana has decades of research and anecdotal data and has just complete their first internal controlled trial.