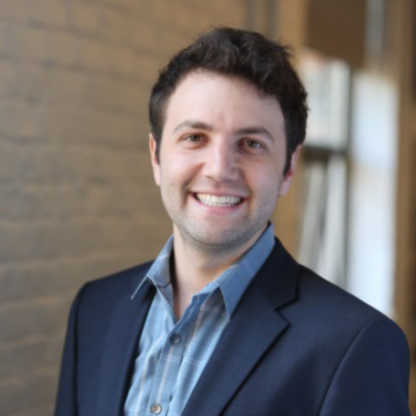 Adam Sachs  0:00
Hey, everybody. Thanks for joining me today. So, I'm Adam Sachs. I'm the founding CEO here at Vicarious surgical. Quick disclaimer here. I'm gonna breeze through this because I think I only have about eight or nine minutes. So my background, I'm a mechanical engineer, focused primarily on biomedical engineering and robotics I studied at MIT. It's where I met Sammy, my co founder, very much actually the cliche college roommate story. And we started this company with our third co founder, Dr. Barry Green, who's an incredibly experienced minimally invasive surgeon. And since then, since starting this company about eight years ago, at this point, we've had the pleasure of being joined by an incredible executive team, with leaders across the industry, including David Styka, our executive chairman, who works, puts a ton of his time into our company, and comes out of Auris Surgical, which is his previous endeavor, the robotics company that was acquired by J&J in 2019 for about $6 billion.

We also have some incredible investors. When we started this company, we were really betting on a technology solution and willing to take that bet with us were some of the most innovative luminaries in the world, including Bill Gates, Vinod Khosla and Khosla ventures, Eric Schmidt innovation, Devers, Jerry Yang, and Omnicloud, E 15. capital as well. And since then, we took our company public last fall, we're traded on the New York Stock Exchange under RBOT. And with that, we raised about 220 million in gross proceeds to fund our development, up to FDA filing, as well as bringing in some incredible investors including some strategics, like Becton Dickinson, the worldwide leader in hernia repair products, as well as one of the largest hospital chains in the US as a major investor.

So before diving into exactly what we're doing, I also want to take a slide or two and just cover what exists today. I think most of you already know probably a lot of this, these are slides for probably a more general audience. Open surgery, of course, you take a scalpel, open up the patient. The important thing here in soft tissue surgery is that with an open procedure, you're cutting through the muscle fibers. With minimally invasive surgery, of course, you bluntly dissect your way in instead, you avoid cutting the muscle muscle fibers use an arbitrator like like the optical trocar. And with that you're able to lower complication rates from almost 20% with open surgery to about 1% with minimally invasive surgery. But that all comes at the cost of a huge increase in complexity for the surgeon. With minimally invasive surgical procedures, the surgeon is stuck triangulating down to a single point in the abdomen from multiple incisions. This means that they need to actually design the motion of their procedure. And for an existing surgical robot, they need to design the motion profile the kinematics of the surgical robot for every procedure based on where they put the incisions and where they want to operate. So this to us is the real vision behind single port surgical robotics. It is not that one incision is that much better than than three to five small incisions actually, it's a lot worse in the case of what exists today. Because the smallest single port robots that are on the market today are two and a half centimeters, we actually have to cut through those muscle fibers again, and lead to 8.4% complication rates. But to us the benefit is that it gets the surgeon past the abdominal wall and into the abdominal cavity all together with the robot with two arms and a camera that they can operate easily.

There's a lot of reasons that existing surgical robots really are have never taken taken off past a couple percent adoption. Now. It's a wonderful market. To be clear, it's a fantastic couple percent, but still stuck at 3.2% adoption due to all of these limitations and really more than anything else due to the learning curve associated with the surgeon having to create the robotic procedure and the robotic motion for every procedure.

Unknown Speaker  4:18
So of course, this brings us to what we're doing.

Unknown Speaker  4:22
When we started this company, we really quickly realized and latched on to the idea that we wanted to have everything go into a single port but also quickly realized that the existing technology just wouldn't support what we needed a flexible robot. That's what most of today's single port technologies are built on. They're just too flexible. They they actually can't generate the forces needed for most procedures, and even to generate the small forces that they can today, they require that 2.5 centimeter incision and rigid robots like what exists in most robotic operating rooms,

Adam Sachs  5:00
today, they have something that we call coupled motion. Essentially, when you move one joint, all of the other distal joints also move through their full range of motion, which you can fix in software. But the the problem that this also results in is that there's an exponential buildup of force up the arm. So that's why with just just a wrist on the end of the stick, robots that are in operating rooms today, ended up needing steel control cables to drive them. We've invented spent the last better part of a decade perfecting our way to fully decouple that motion to allow us to have nine degrees of freedom per arm, all through a single 1.5 centimeter incision, a normal laparoscopic sized incision. But once it's inside the abdomen, the surgeon now has an incredible camera for amazing visualization, and incredible access with nine degrees of freedom. With today's surgical robots, they're stuck with these wrists on a stick that have seven degrees of freedom where if you choose your incision sites correctly, you get pretty good motion. But if you choose incorrectly, you get collisions inside the body and collisions outside of the body. we've recreated the extra joints that humans have with wrists, elbows and shoulders to allow surgeons to reach around things and even with almost creepy superhuman flexibility reach all the way back around their incision site.

Maybe I shook this too much. There we go. So the first market that we'll be targeting is ventral hernia repair. It's an incredible market. But it very much is just our first step and a stepping stone to everything else. There's almost a million ventral hernias every year in the United States. And most of them are repaired with on lay mesh techniques or IPAM techniques, where you essentially just adhere a mesh or tack a mesh up to the abdominal wall. This results in 20% recurrence, there are better ways to do this procedure. But with existing surgical robots, they're incredibly challenging, and resulted in over four hour long procedures. In cadaver studies, we've proven out our ability to do the same procedures in under two hours. We've actually done them since in under one hour due to our robots ability to work easily up on the ceiling, back at itself create flaps on both sides of the of the abdominal wall and tuck a mesh in so everything closed all through a single small incision.

Of course, this really is just our first market. We'll be launching tool after tool and indication after indication to be able to address the broader soft tissue market.

So our websites up there I'll be around till sometime tomorrow. So feel free to reach out and thank you everybody very much.