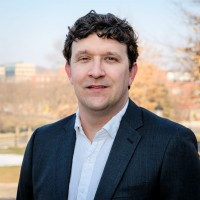 CEO, iotaMotion
Read Biography
The company has developed iotaSoft, a miniature robotic system that is the size of a thumb. iotaSoft is capable of more accurately guiding the electrode of the cochlear implant through the ear, without damaging sensitive areas of the ear.

Dr. Chris Kaufmann brings over 14 years of experience in medicine, engineering, and business and is responsible for iotaMotion’s corporate and technology development. As a co-founder and co-inventor of the company’s technology, he has built and led iotaMotion from product concept and development, through manufacturing development, clinical studies, and regulatory submission. Prior to leaving surgical training to join the company full-time, Dr. Kaufmann was an Otolaryngology Head & Neck Surgery resident and NIH research fellow at the University of Iowa and a General Surgery resident at UT Health San Antonio. He has previous medical device concept development experience at 3M/KCI and the Advanced Implant Materials and Systems lab at UT San Antonio. Dr. Kaufmann’s work has resulted in numerous patents and over 20 peer reviewed articles and proceedings in the fields of Otolaryngology, Cardiology, Dermatology, Biomaterials, and Material Science. His combination of market, technical, and clinical perspectives, and engineering expertise is instrumental in iotaMotion’s success.