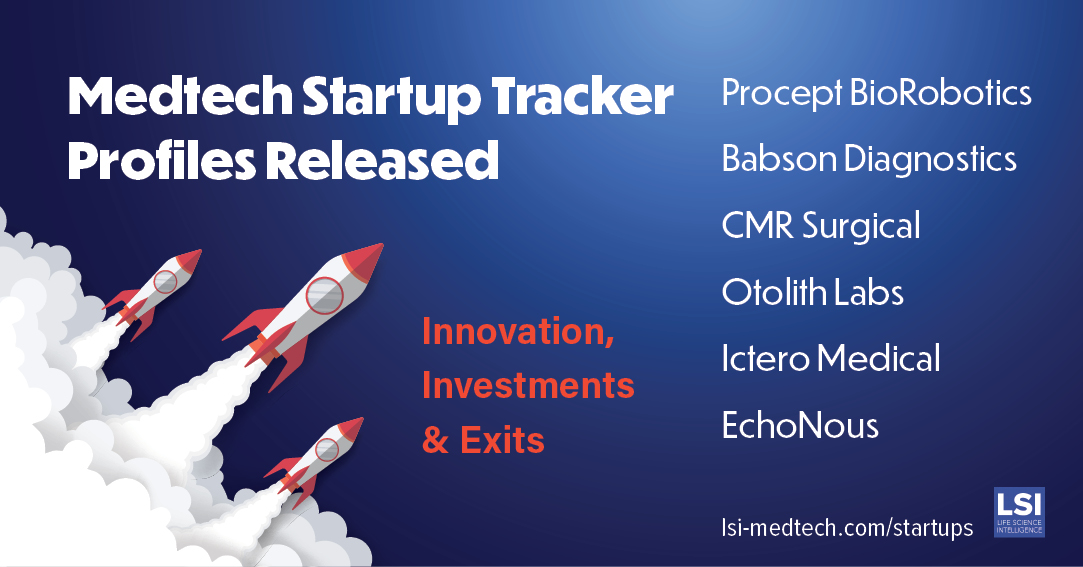 This week in medtech deals an over $1.5 billion in funding was raised across 15 deals, in addition to a number of other undisclosed deals that were announced. Here are some of the top deals tracked:

Procept is a surgical robotic company developing a water-based system for the treatment of symptomatic benign prostatic hyperplasia (BPH). In February 2021 the company received 510(k) clearance from the FDA for the AquaBeam Robotic System, which uses a heat-free waterjet to remove prostatic tissue without causing complications typically associated with thermal-based treatments (e.g. laser and RF ablation). The investment will allow Procept to scale up its global commercialization engine. To date the company has raised an estimated $368.3M in funding across 8 funding rounds. Boston Scientific, Olympus, and Teleflex are some of the key strategics with devices for the treatment of BPH.

To achieve the company’s goal of making diagnostic testing more accessible and convenient for patients, Babson Diagnostics has developing an end-to-end solution for patients and healthcare providers. Traditionally diagnostic blood testing has required large tubes of blood to collect enough sample for diagnostic testing. Babson Diagnostics has developed a proprietary miniaturized assay which can perform diagnostic testing from a small capillary collection sample. Samples are analyzed at the company’s CLIA-certified laboratory and results are sent in less than 24 hours to patients’ providers. The company recently closed a Series B round investment of $31M, which brings the company’s total funding amount to approximately $45M.

CMR Surgical raises nearly $600M from a Series D round

UK-based CMR Surgical, developers of a next-generation robotic surgery system, has now raised nearly $1B (~$975M). This latest round brings the company’s value to an estimated $3B. Funds from this round will be used to support the commercialization of the company’s Versius system. While the Versius system has not received market approval the FDA, the system is commercially available in Australia, Europe, India, and the Middle East. Asensus Surgical (formerly TransEnterix), Intuitive Surgical, and Stryker are some of the leading competitors in the robotic surgery market.

Otolith Labs is developing a wearable medical device for the treatment of vertigo. The non-pharmacological treatment uses non-invasive mechanical stimulation of the to the vestibular system to instantaneously provide relief from vertigo symptoms. The company has received Breakthrough Device designation from the FDA and is currently seeking regulatory approval through the De Novo process for the device. Otolith has raised approximately $5.7M in capital across five fundraising rounds.

Ictero Medical is developing a minimally invasive ablation solution for the treatment of gallstones. Current options for the treatment of gallstones include the surgical removal of the gallbladder (cholecystectomy), which impacts quality of life, and medications to dissolve gallstones. The company’s CholeSafe system uses cryoablation (i.e. freezing) to safely treat gallstones. The company is supported by multiple partners, including Johnson & Johnson, Medtech Innovator, and TMC.

The company recently raised $60M from a venture round to support commercialization of its latest AI-guided Kosmos ultrasound system. Approved in March 2020, the Kosmos ultrasound system features an 8oz. handheld probe and a tablet that utilizes AI calculation to perform clinical tasks, such as calculation of ejection fraction. In addition to the Kosmos system, EchoNous offers the EchoNous Vein and Bladder probes for the placement of peripheral lines and evaluation of bladder volume, respectively. Key strategics in the ultrasound market include Esaote, GE Healthcare, and Philips.