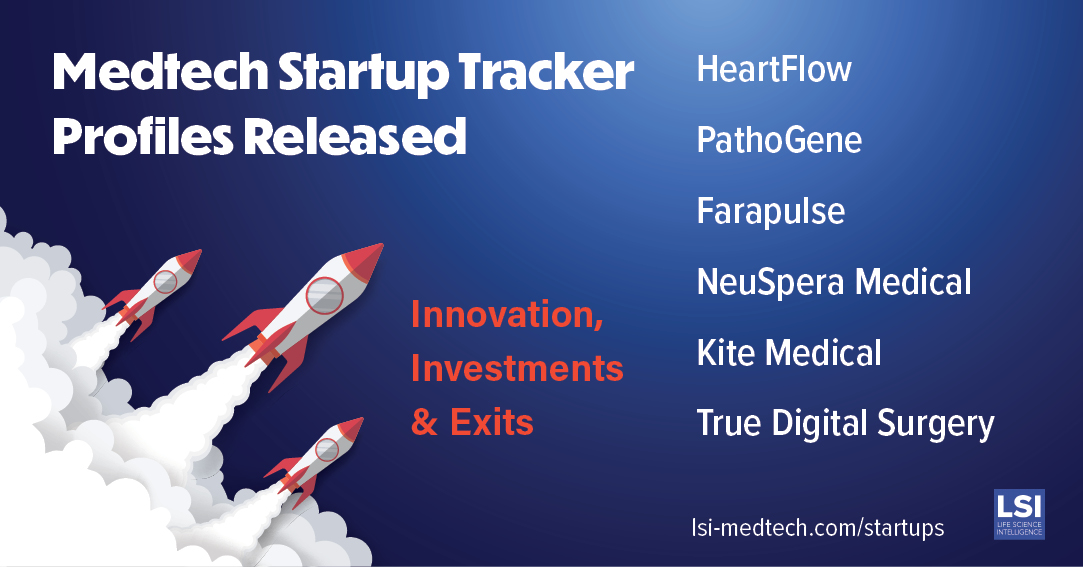 This week in medtech deals sees a significant dip following lasts weeks staggering ~$500M in funding. An estimated $111M in funding was raised across 3 deals in the past week, with the single biggest deal being attributed to NeuSpera Medical, which announced that it had raised $65M on July 20th.

Through the acquisition, HeartFlow will become a publicly traded company with an estimated pro forma enterprise value of $2.4B an $400M in cash after closing. The post-IPO funding will support product development, growth capital, and general corporate purposes according to HeartFlow. The company develops and commercializes the FDA-cleared HeartFlow FFRCT Analysis, a non-invasive test for evaluating stable symptomatic patients with coronary artery disease. HeartFlow Analysis transforms standard CT angiograms into a personalized 3D model of the patient’s heart that incorporates fractional flow reserve data on the coronary arteries. Prior to the announcement of this SPAC merger, HeartFlow had raised $577.7M in funding.

PathoGene is developing an automated, sample-to-answer in vitro diagnostic device

The company’s technology will be capable of detecting and identifying all known human pathogens and determining antimicrobial resistance profiles from a six-hour test panel. The IVD device will take advantage of cloud computing, third-generation DNA & RNA sequencing, and robotics to enable real-time disease surveillance to healthcare providers. In early July 2021, Pathogene announced that it had raised $500,000 from a Seed round. Key strategics in the IVD market include Bio-Rad Laboratories, Illumina, and Qiagen.

Farapulse – non-thermal ablation for the treatment of cardiac arrhythmias

Arrhythmia (e.g. atrial fibrillation) requiring an intervention is most frequently treated with catheter-based thermal energy to create scar tissue that blocks abnormal electrical signals which cause irregular heartbeats. One of the most significant drawbacks to this approach is that thermal energy may damage surrounding tissues. To address this limitation, Farapulse has developed pulsed field ablation (PFA), a non-thermal treatment method that uses irreversible electroporation to selectively ablate cardiac tissue. While the technology is currently not commercially available in the US, Farapulse has received the CE Mark for its Farapulse PFA system. In June 2021, Boston Scientific announced that it would acquire Farapulse and their PFA technology which compliments Boston Scientific’s electrophysiology portfolio. The acquisition entailed an upfront payment of $295M, $92M in future milestone payments, and additional revenue-based payments for the next three years. Prior to the acquisition, Farapulse had raised approximately $45.6M in funding.

The majority of the investment will provide additional funding for NeuSpera’s ongoing clinical trail evaluating the company’s miniature neuromodulation device for the treatment of overactive bladder. The close of this most recent round of funding brings the total capital raised by NeuSpera Medical to an estimated $111.9M. NeuSpera Medical are developing a leadless micro-implant that is regulated by a patient’s smartphone. The micro-implant is highly modular, which will enable a flexibility in neurostimulation approaches. The company is initially focusing development of its technology for the treatment of urinary urgency incontinence using a sacral neuromodulation implant. Boston Scientific, LivaNova, and Medtronic are leading strategics in the implantable neuromodulation devices market.

Kite Medical is using electrical impedance tomography to assess and monitor children for kidney reflux disease, also known as vesicoureteral reflux (VUR). Electrical impedance tomography measures the conductivity, permittivity, and impedance of a part of the body. In this instance, the technology measures urine volume in the bladder, kidneys, or ureter to determine if common symptoms of urinary reflux are due to backflow.  According to Kite Medical, the technology could benefit more than 1.5M children in the US and Europe who require annual screening for the disease. The disease is currently diagnosed via catheterization of the ureter and injection of X-ray contrast dye to determine if backflow is occurring. Kite Medical’s solution eliminates the need for uncomfortable catheterization and exposure to radiation for diagnosis of VUR.

The company develops a platform of technologies, including surgical microscopes that incorporate robotics and software to digitize surgical procedures. True Digital Surgery’s flagship platform, Occipta, is an ocular-free system with features such as a 6-axis robotic arm, “lock on target” technology, position memory software, and support for visualization in 4K resolution.  The company works with other medtech companies (e.g. Aesculap) to power the digital surgery solutions behind their surgical visualization systems. Other companies that offer surgical microscopes include Carl Zeiss and Leica Biosystems.