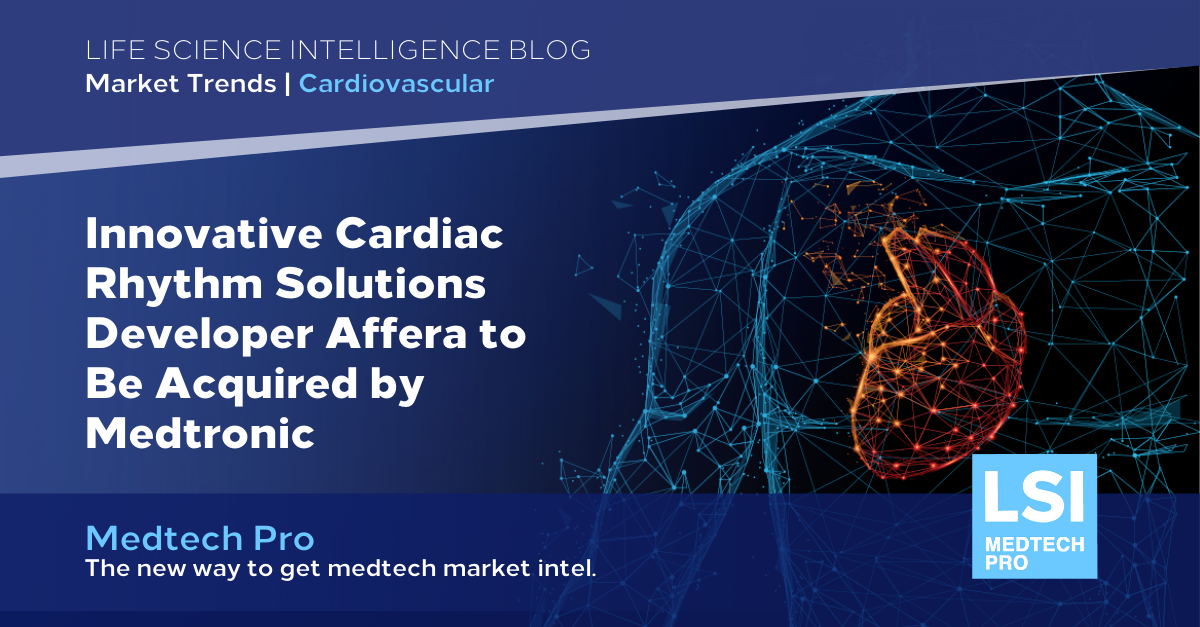 By acquiring Affera, Medtronic is likely to further strengthen its already significant position in the cardiac ablation devices market. According to LSI’s Week 6 Impact Analysis Update from the Medtech Pro COVID-19 Impact Tracker, Medtronic is already a global leader in the medical devices market with $31B in revenues(2019).

Affera is an innovative startup in the cardiac ablation space which had already attracted significant attention. According to the Medtech Pro Startup Tracker, Affera had previously raised $8M in Series A funding. Recently, the company raised $75M primarily from Bain Capital Life Sciences.

These investments indicate Affera has a lot to offer. With a specific focus on cardiac ablation devices, Affera has developed innovative approaches to cardiac ablation technology by utilizing pulsed-field ablation. This new technique has safety advantages over more traditional radio frequency approaches. For example, pulsed field-ablation avoids possible risks of radio-frequency-based catheterization, such as thermal injury to the esophagus and nerve damage. In the bigger picture, Affera brings a fresh approach to an industry already slated for significant growth in the next five years. To understand why, let’s quickly review the medical conditions that require cardiac ablation.

A normal, healthy heart has a regular steady rhythm that will increase or decrease depending on the activity of the individual. The heartbeat is regulated by electrical signals in the muscle, generated by electric potentials controlled by electrolytes such as sodium, calcium, and potassium. However, the heart doesn’t always beat in perfect rhythm. Even perfectly healthy people will have a sensation of the heart skipping a beat or fluttering. These sensations are what healthcare providers call heart arrhythmias, which are problems that arise when this signaling becomes faulty.

For most, these sensations are temporary and harmless. However, for others, they may indicate a serious health problem. These problems may come in the form of a racing heart rate, known as tachycardia, which is a sustained heart rate of 100 beats per minute or higher without physical exertion. On the opposite end of the spectrum, an abnormally slow heart rate is known as bradycardia, generally considered to be a heart rate of fewer than 60 beats per minute. Heartbeats can also be irregular. These types of heart rhythms can be temporary but may also cause long-term health risks, and they can even be life-threatening.

Atrial fibrillation is a common heart arrhythmia problem that can cause death or disability because it raises the risk of stroke. Normally, the upper and lower chambers of the heart are in sync, but when a patient has atrial fibrillation, the upper chambers of the heart are beating in an unregulated fashion. This can not only cause irregularities in the heartbeat, including a fast pulse, but it can also lead to blood pooling in the heart’s chambers which can clot. These clots can travel up to the brain, causing a stroke. There are other types of health problems that can cause similar issues, such as atrial flutter.

Different treatment approaches may be warranted depending on the severity and length of time a patient has been suffering from a heart arrhythmia. These range from medication to the utilization of a procedure known as catheter ablation. This type of procedure uses a catheter to destroy a portion of tissue in the heart that is causing the irregular heart rhythm. Scar tissue forms at the site, which helps prevent arrhythmias in the future.

The risk factors for developing atrial fibrillation hint to a growing need for catheterization procedures. Age is a leading risk factor, and other risk factors include previous heart attack, diabetes, and even previous infection with Covid-19.

According to the Medtech Pro Cardiac Ablation Devices Medical Device Market Snapshot, the industry is expected to achieve a stunning CAGR 2020-24 of 15.6%. As of 2020, cardiac ablation devices were a $1.7B market with sales of 469,000 units. This market includes radio frequency ablation and cryoablation catheters for the elimination of aberrant conduction pathways in the heart, primarily employed for the treatment of arrhythmias.

While 2020 saw a small slowdown due to the impacts of Covid-19, growth resumed in 2021 and is expected to continue through the foreseeable future. LSI sees unit volume increasing from 469,000 in 2020 to 830,000 by 2024, with total sales increasing from $1.7B to $3B over the same time period. Market leaders in the space include J&J/Biosense, Boston Scientific, Atricure, Abbott, Stereotaxis, and Medtronic.

J&J Bioscience dominated the cardiac ablation devices market in 2020, with a 63.4% market share. This is far above the nearest competitor, but in 2020 Medtronic had the second-largest market share with 10.3%. By acquiring Affera, Medtronic will move to the forefront of the market with Affera’s innovative new technologies in cardiac ablation. With the promise of increased safety via a treatment that allows physicians to target cardiac ablation more precisely, Medtronic stands to gain significant market share in the coming years.

Visit LSI’s Medtech Pro for more market data on the global market for cardiovascular technologies and other Medtech markets, and sign-up for the LSI Blog to receive monthly insights into Market Trends.